We recognize that encouraging an active child to sit and listen to music when they would rather be at play can be a challenge. Parents have regularly asked us if their child could play with toys or video games while listening to EASe CD’s. Our answer has always been, “Yes, with the sound down.”

Now our children can listen to their EASe CD audio, while enjoying stimulating, fun and nonviolent driving and flying video games.

Your child deserves to have some fun, and to learn how to manage the noise that torments them and balance issues that cause them constant difficulty. Now you can help them with EASe Games!

EASe Airshow is an exhilarating game that allows the player to fly a quick-maneuvering airplane through the clouds, aiming to pop giant red and green balloons, while EASe music plays automatically in the background.

In a fun and easy to control aircraft, the player will explore two cloud-filled levels: a tropical sandy terrain, and mountainous region with lakes and foliage. Each level is selectable in three difficulty modes, with balloons floating away quicker in the harder levels. EASe Airshow features a lush environment complete with realistic clouds, giant balloons, and an impressive jet engine simulation!

While playing EASe Airshow, the player will experience vestibular challenges, as they zoom through the clouds in their own aircraft, experimenting with stunt-plane maneuvers. Visual challenges are also inherent in the pursuit of the floating balloons, while clouds and the aircraft’s own jet flame flies past the camera.

EASe Airshow’s vehicle is controlled by the mouse, and is selectable in two speeds: a slower speed for beginners, and a faster airplane for more adventurous players. 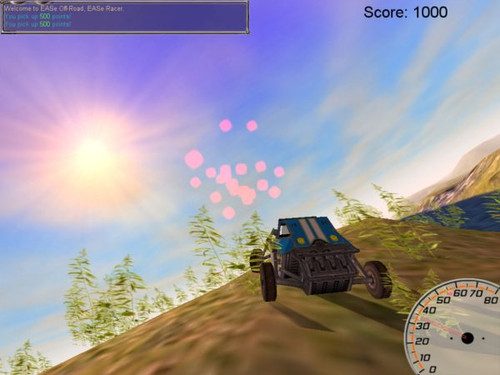